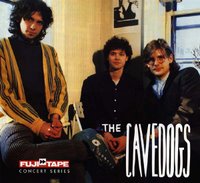 Devotees of our favorite genre are used to seeing their heroes neglected by the general public. Perhaps we love them the more for it. Personally, though, when the music is right I’d like to share it with as many people as possible. Shoes, Hawks, Game Theory, Richard X. Heyman, The Posies, Teenage Fanclub, Velvet Crush, Guided By Voices–we each cherish our own personal pantheon. We scratch our heads, wonder if we're geeks, and continue to listen with joy.

Such for me, and I imagine for some of you, are Boston’s early-90s trio, The Cavedogs. I say “for some of you” because it’s natural some visitors to a site so named would have heard of and enjoyed their music. I am hoping at this blog to put visitors new to powerpop in touch with some of the music we love. I am hoping all visitors will recommend their own heroes.

Reminiscent of The Beatles, The Who, Cheap Trick, and The Kinks, The Cavedogs had it all: chiming guitars, power chords, hooks out the kazoo, clever lyrics, tight harmonies in Lennonesque voices, everything except a third lp. Criminal, yes, but see paragraph one.

If you like any of this, head over to their website for the free stuff I didn’t post, including both studio and live recordings. Their two albums are available, used, at Amazon for unbelievable prices. The debut, Joyrides for Shut-Ins, is selling for $2.66, while Soul Martini is selling for $.01. Yes, one freakin’ penny, plus shipping. Before concluding these prices reflect on the band rather than this crazy world, please give a listen.

i saw the cavedogs countless times in boston. they were / are amazing. a truly great power pop band! their albums cameout through enigma and capitol and therefore they are now completely unavailable. it would be great if someone would re-issue them - they still sound great!

I'm jealous you got to see them so many times because even once would have been fantastic. Do they ever perform together anymore? As you can tell, I love this band and I totally agree with you about re-issuing. Thanks for your comments.