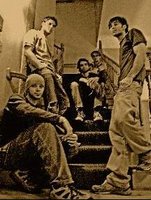 I happened upon The Happies back in February and pretty much got their name. Here’s how the Salt Lake City band are described on their website.

The Happies are an indie entity with a sound that bears a striking resemblance to bands in the vein of Belle & Sebastian, The Shins, Grandaddy, and The Beatles (if they were around today). "The Happies combine the best of the English singer-songwriter angle with washy, emotional American indie rock and a certain whimsical, fussy, quaint, old-fashioned splash which recalls The Coral. Stratford 4, Simon & Garfunkle, Rilo Kiley and Bonnie “Prince” Billy" (SLUG Magazine). They were awarded "Best Unsigned Local Band" in Salt Lake City Weekly's Best of 2005. "If We Were Really Here" is their first album to be released through Eden's Watchtower Records.
I’m guessing many of you poppers have already met The Happies, but in case not, here are a few songs from their debut. You can download the entire album Meet the Happies here. Once there, you can also make arrangements to buy their second album, If We Were Really Here. You will also find more about them at their MySpace site.

The Happies - Meet the Happies
hey little buttercup mp3
if mp3
this is yr stereolab mp3
Posted by pplist at Monday, November 27, 2006