'Twas but a bit over a year ago that we sent you and ourselves scurrying over to Indie Rock Cafe to catch Worcester (Old England) one-man band, Virals. We feverishly bought the Coming Up with the Sun EP and anything else we could get our ears on and recently purchased "their" Strange Fruit EP over at eMusic. So after a bunch of recent pleasure-inducing aural experiences and a bit of snooping around, we found the below. Read and hear more here, here, here, and here. 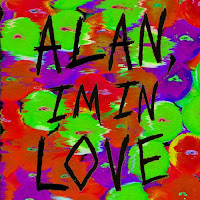 Not quite as much action of late, but here's a baker's dozen of newbs, semi-newbs, and a longtimer we're loving. Thanks to the fabbloggers who house them.

The Romantics - Talking In Your Sleep - Popdose - Please don't laugh. (On the other hand, it healeth like a medicine.) We love this one, always have, always will, especially the strumming in the chorus. (Sorry if we're getting too analytical/pushy. It won't happen again.)

The Happy Few: Geevers to "Me" 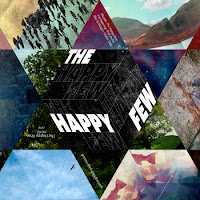 A certain uneasiness arises when we hear a beloved demo has been transformed into a full-fledged recording. We were delighted our recent reposting of The Happy Few's "Give It to Me" prompted an email from long-and-much-admired frontman, Joep Geevers. (And, no, it's not just because he's got one of the coolest names in rock.) We were further delighted to hear that, though somewhat silent the past six years, THF are still at it and plan to release their debut album, The Alarmingly Unstable, "after the summer."

So why, pp, why were you feeling uneasy???

Well, "we'll" tell ya.  It's because two of the numbers on the recently released promo are full studio reworkings of much-beloved demos, "Red & Blue" and "Give It to Me." "Would they measure up?" we mused.

We needn't have worried. Repeated listenings to the demos naturally made us aware of each subtle difference in the studio versions, but they are nice differences, and we love the fuller sound. (Not that we require a fuller sound. Some of the greatest listening experiences in "our" life came through one solitary earplug attached to a tinny, tiny transistor radio, lying in "our" bed in the moonlight as that First Great Wave washed from Albion's shores across the Atlantic back in '63-'64. Damn, freakin' poet(aster)(s) here.)

But we digress. Thank you, Joep, for hooking us up with the promo and for the excellent new song on it. You def keep us happy and we're glad you are, too.

Oh, and how could we forget? The Happy Few will be the support band for legendary Northern Irish punkpoppers, The Undertones, Thursday, May 30, in Amstelveen. As Joep correctly noted, our attendance might be logistically problematical, but we will certainly be there in spirit.

Gettin' Loose with Those Darlins 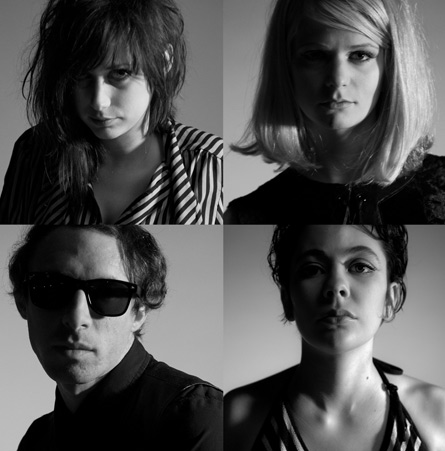 We were just now in terrible need of this song, achieved consummation, wondered if it might be available for free dl, and VOILA! It looks like this is kinda turnin' into Nashville week, what with that Fancytramp post last week 'n' all. Frankly, we're as surprised as you('re not, what with not really knowin' us 'n' all). You'll find more by 'n' about Those Darlins here, here, here, 'n' here. 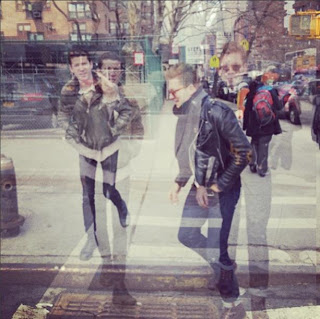 We love the bite and tail of these San Diego reptiles. The following is from their new one, Crimes of Passion, due to drop August 20 on Frenchkiss Records. Thanks to Kip Kouri at Tell All Your Friends for the headsup.

And here's one we've been enjoying for awhile now. It's from their previous Frenchkiss excelente, Endless Flowers. Love the Teutonic count-off (and that's an order, jah?)!

And here's a nice cover we've been meaning to post for some time now.

And as long as we've got this Godot thing going, here's one we posted awhile ago. There's more there.

Trippin' with It's a King Thing, The Seasongs, The Arctic Flow, The French Semester, Italian Japanese, & Young Boys


Little did we know that simple trips to buy some food and post a letter would lead us to post . . . a post. Here's part of the soundtrack, in order of play. (All are available for free download, sometimes via the entire album.) We don't anticipate winning any design awards for this one and, yes, we realize we previously posted or pointed "you" toward some of these, but, like, okay.

The Return of Woody Whatever 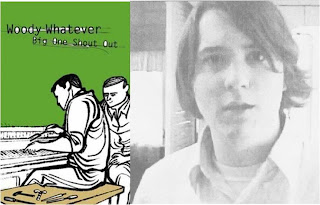 Philadelphia's Woody Whatever was certifiably the fourth post we ever did at this blogofours.*** Those dittylinks disappeared in the hoary past, but a recent search found new ones. We still love the songs, which fit perfectly with all this DIY bidness we've been saluting of late. (Well, once, but whatever.)

"Woody" has once again made his huge ouevre available for very reasonable fare (in this case, NAME YOUR PRICE). That might be he in the picture above right. Maybe above left, too. We're rambling now, so to the tunes. Oh, one other thing. It's kind of strange that the first song below says "buy," while the second one says "download." Fear not: you can get the second one with a simple click or two and the first by downloading the entire LP for NYP.

Labels: hoary past, Woody Whatever 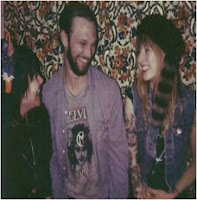 We're not generally fond of Music City's output, but these Nashville cats are charming us mightily, (and we're not even bees). We are definitely fond of tramps, though, and if they're fancy, so much the better. Incidentally, we must confess that picture revives a long-held, deeply ingrained coonskin cap-envy, but we'll get over it. One more non sequitur and we'll have a totally themeless paragraph. Done.

Dogs Got A Bone's Got Doggone Good Tracks 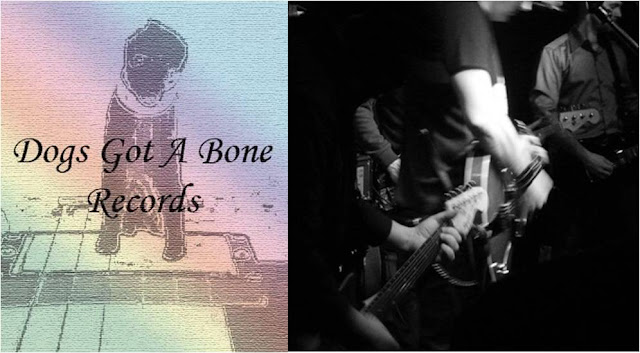 We found Edinburgh label Dogs Got A Bone via French blog Exploring Spastic Inevitable, to whom we proffer the paw of friendship and thanks. The Edinburghers have a kennel-full of excellent tuneage at Bandcamp, especially of the psychedelic breed.

The tunes below say "share" and stuff, but you can freely download the entire LPs from which they come and then pick and choose the ones you want to adopt. Yes, we, too, tire of this canine-based foolery and herewith bring it to heel. We have barely scratched the surface of what we could do with this, so, yes, you're very welcome.

The Pharmacy Have Just the Right Rx 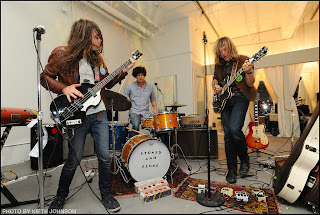 We wish we could remember where we found that first song down there, so we'd just like to say, "Thanks." We'd also like to thank Old Flame Records for making the Seattle band's fab - and we do mean fab - music available. We posted on them quite awhile ago and wish that songlink were still working. Click here, though, and you should find it.

We Now Join (the) Math and Physics Club! 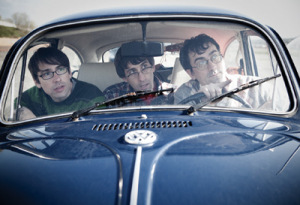 This delightful ditty's been popping up in our 'pod and pate of late, so we thought, "Why NOT?" Info and the same photo here.
Posted by pplist at Saturday, May 11, 2013 No comments: 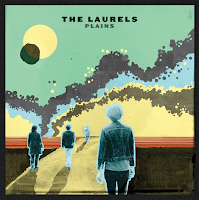 The Pop - Down on the Boulevard - Requiem Pour Un Twister

Hooded Fang - Graves - Side One Track One

A bit of the old Ctrl-F or Command-F search maneuver might help you navigate this massive mp3 archive:

Mozes and the Firstborn Lead Us to the Promized Land 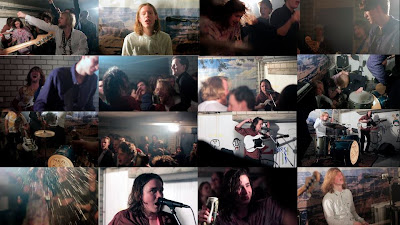 Well, we'd really like to be "IN," but it looks logistically problematical at the moment. We are, however, very much "DOWN" with what this Dutch crüe are up to and will be listening as if we were there.

A lot more freely downloadable widgeted megagoodness is promized (and delivered) at Bandcamp.

That last one, OF COURSE, leads us to Utrecht, back to another band of Nederlanders we haven't heard from for awhile but still very much love listening to.

That was the original demo. Here's the updated studio version, plus a couple more.

Labels: Mozes and the Firstborn, The Happy Few

Drawn to The Top Drawers 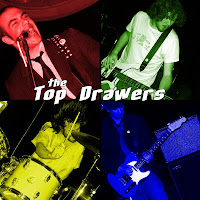 Once again our portable listening device lures us to someone we need to post. (Thanks, pld.) Under instant scrutiny are Vancouver band The Top Drawers. We bought some of their product a few years back and are delighted to find it available on a NAME YOUR PRICE basis at Bandcamp. There are so many excelentes on You're So Fine it was hard to narrow it down to those below. But when the going gets tough, etc. We'll kick it off with the one pld reminded us of on the drive home today and then go on from there.