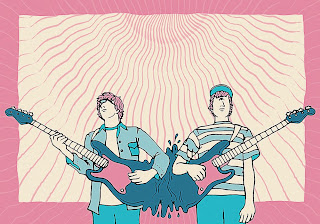 Nice finds. Get thee thither before it's too late. Inexpressible thanks to the hosts.

Veronica Falls - Nobody There - Side One Track One

The New Pornographers - The Laws Have Changed - Heartache With Hard Work

We're not exactly sure who Newtown Radio are or how they got such great connections, but they post a shipload of great music. So thank you, Newtown Radio, thank you very much. BTW, the following are grouped by post. A small point perhaps, but potentially useful.

Oh, and one other thing: when you get to NR, a song begins playing automatically. Unless you enjoy listening to two songs at once, you might want to click the PAUSE thingy in the pink area labelled "THE BROADCAST." We say "Unless" because occasionally we'll find a page where you can listen to a bunch of songs at once. We'll get, like, seven or eight numbers playing simultaneously and enjoy the strangely satisfying cacophony. A small point perhaps, but potentially useless.