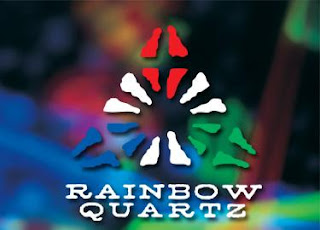 In that Gurus post earlier in the week we "forgot" to tell you something rather important and exciting. (For after all, one can only absorb so much excitement without discombobulating or making a mess.) We learned of The Gurus' forthcoming effort via a friendly post from the amiable Ms. Kathryn Muselik over at the ever-toothy Shark Party Media. What we "forgot" to tell you is that The Gurus LP is but one of seven (7) LPs to be released by the incomparable chimepsychpowerpoppin' label Rainbow Quartz over the next two months. Yes, be still your heart. What we tried to do in that little sampler above is get you warmed up with some of the artists' earlier efforts. We don't have free & downloadables from their forthcoming LPs but will surely post them should they come into our clickable possession. (Click the LP and EP titles up there to go to their Rainbow Quartz page, where you will find more f&dl's.)

So here's the schedule Shark Media gave us, with clickable pre-purchase links. Amazon seems to be jumping the gun, and sometimes the Shark, so we're just relaying release info as we have it. All should go swimmingly, whatever.

The Capstan Shafts - Heart Your Eat Out mp3 - from Revelation Skirts, released August 24, 2010
And just for gins and griggles (hard g's, please), here are a few of our favorite Rainbow Quartz songs. It was impossible to narrow it down, so go to RQ's Artists Page and plan to spend hours dl'ing.

Myracle Brah - I'd Rather Be mp3

Outrageous Cherry - Girl You've Got Magic Inside You mp3