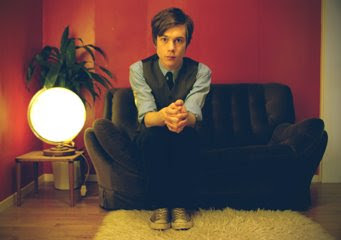 The Eyes have It.
Bedroom Eyes was among my earliest posts and I’ve been enjoying the one-man band’s every song ever since. As the photo clearly shows, both eyes belong to Jonas Jonnson, who happens to be from Östersund, Sweden. (Twelve more are in play for live concerts.) BE/JJ has just released his second EP, Valentine Vacancy, and once again, he’s batting four-for-four. (Ja, sure, pun intended.) I’m posting my two favorites from VV and two more from the first EP, Embrace in Stereo. The rest can be found at the bandsite, where all are available for free downloading. Special thanks to Morten at Hits in the Car for the headsup.
Bedroom Eyes
Valentine Vacancy EP
Hand-In-Hand Grenade mp3
Norwegian Pop mp3
Embrace in Stereo EP
Blueprint for Departure mp3
Motorcycle Daydream mp3
Posted by pplist at Friday, June 22, 2007