Girls at Our Best! 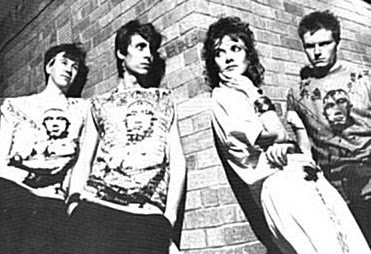 Why don’t we just let the ever-helpful All Music tell it like it was.
Formed in Leeds, England in 1979, the pop-punk unit Girls at Our Best! comprised vocalist Judy Evans, guitarist James Alan and bassist Gerald Swift. Originally dubbed the Butterflies, they kicked around the British punk scene, and were on the verge of disabanding when they responded to an advertisement posted by a Cambridge area recording studio offering half-off session rates. With the aid of drummer Chris Oldroyd, the group recorded two tracks, "Warm Girls" and "Getting Nowhere Fast." In the spring of 1980, the demo was released as a single on Rough Trade under the name Girls at Our Best!, an appellation taken from a lyric in "Warm Girls." With session drummer Paul Simon, the band soon re-entered the studio to cut their second single, "Politics," which like its predecessor topped the U.K. indie charts. After the permanent addition of former Expelaires drummer Carl Harper, Girls at Our Best! issued a third single, "Go for Gold," followed in 1981 by the release of their long-awaited debut LP Pleasure. Though no formal announcement of their break-up ever appeared, the record was the group's last.
I don’t remember when or where I first heard them but with each listen I like them more.